Carroll entered the national political arena in the 1850s, following her father's appointment as Naval Officer for the District of Baltimore by Whig President Zachary Taylor. Shortly thereafter, Taylor died and Carroll's commission was signed by Millard Fillmore. In 1854, Carroll joined the American Party (the Know Nothing Party) following the demise of the Whigs. At the time much political realigning was going on nationwide. The same year the Republican party was formed and the Southern proslavery Democrats were to take over the control of their leadership in Congress due to the defeat of many Northern Democrats following the passage of the Kansas-Nebraska Bill in May. In Maryland, large numbers of immigrants, largely German and Irish Catholics, had flooded into Baltimore following the famines of the 1840s, taking work in the port and railroad yards. Due to this rapid urbanization, street crime became a problem and relief rolls rose. At the same time planters were a strong force in the state with many Catholic and Episcopalian ones residing on the Eastern Shore. Indeed the Catholic Church [Catholic Church] owned a large number of slaves in the state. In 1853, the Maryland Know Nothing party was formed, initially, from three nativist groups. Yet beginning in February, it took in large numbers of striking laborers from the ironworks factory in Baltimore who the Democratic party had refused to support. Thus in opposing the proslavery Democrats, the Know Nothings became the most powerful and progressive party in the state, being not proslavery, pro-Union, and prolabor.

Along with other reformers, Carroll campaigned against urban machine corruption, crime, and what was perceived as the political threat of the power of the Catholic Church. In Maryland the Catholic planter/urban vote could combine to establish a proslavery state government. In 1856, the party then split nationally into Northern and Southern factions due to the slavery issue. During the 1856 presidential election, Carroll supported and campaigned on behalf of Fillmore, the South American/Whig candidate writing many articles and pamphlets and touring the Northeast on his behalf. Considered a moderate, Fillmore carried the state of Maryland, the only one he won. For the 1856 campaign, Carroll published two party books that greatly extended her political and press contacts: The Great American Battle, or, The Contest Between Christianity and Political Romanism and The Star of the West, and influential pamphlets such as "The Union of the States". In 1857 Carroll was the chief publicist for Governor Thomas H. Hicks of Maryland and he credited his victory to her writings. In 1859, she took up the cause of former Congressman John Minor Botts, a Unionist from Virginia, in his presidential bid. She wrote a series of articles in the _New York Evening Express_ newspaper on the 1860 candidates under the pseudonym "Hancock." Others over time appeared in the influential National Intelligencer, among other venues.

With the election of Abraham Lincoln as president in 1860, Carroll freed her own slaves and turned her activities toward opposition to the secession of the Southern states and keeping Maryland loyal. Lincoln’s election set off the secession movement out of the Union which began with South Carolina’s exit on December 20, 1860. In February 1861, the Confederate government was formed in Montgomery, Alabama. During this time Carroll was advising Governor Thomas H. Hicks on compromise efforts in the Congress and sending intelligence on Confederate plans that may have resulted in a coup d’etat of Washington, D.C. had Maryland seceded, once Virginia went out.

During the summer of 1861, Carroll wrote a political pamphlet in response to a speech given on the floor of the senate by the Hon. John C. Breckinridge of Kentucky who argued that Lincoln had acted in violation of the Constitution by mustering state militias into service following the bombardment of Fort Sumter, suspending the writ of habeas corpus, and imposing martial law and a naval blockade. In her _Reply_ pamphlet that was widely circulated by the Lincoln administration, Carroll made informed legal arguments stating that Lincoln had acted in accordance with the United States Constitution. Under a verbal agreement made with the government, by 1862 Carroll had produced three more war powers pamphlets that presented able constitutional arguments supporting the federal government’s actions. Governor Hicks wrote that her documents did more to elect a Union man as his successor than “all the rest of the campaign documents together.”

In the fall of 1861, Carroll traveled to St. Louis to work with secret agent, Judge Lemuel Dale Evans, who had been appointed by Secretary of State William H. Seward, to assess the feasibility of an invasion of Texas. Carroll worked on her second war powers paper at the Mercantile Library where she sleuthed out information from the head librarian who was Confederate General Joe Johnston’s brother. She took military matters into her own hands when she initiated an interview with a riverboat pilot Capt. Charles M. Scott about the feasibility of the planned Union Mississippi River expedition. Scott informed her that he and other pilots thought the advance ill conceived due to the fact that there were many defensible points on the Mississippi River that could be reinforced and it could take years just to open it up to navigation. Carroll then questioned Scott about the feasibility of the use of the Tennessee and Cumberland rivers for a Union invasion. Scott provided Carroll technical navigation details. Based on this information Carroll wrote a memorandum that she sent to Assistant Secretary of War Thomas A. Scott and Attorney General Edward Bates advocating that the combined army-navy forces change their invasion route from the Mississippi to the Tennessee and Cumberland rivers. Scott took the plan to Lincoln who deemed the plan viable. Evidence indicates that on the advice of Senator Benjamin F. Wade, chairman of the Committee on the Conduct of the War, Lincoln appointed Edwin Stanton secretary of war in January 1862 to implement the Tennessee River plan.

Meanwhile in St. Louis, Major General Henry W. Halleck was planning the same movement without Lincoln’s knowledge. Upon learning that Confederates were possibly sending reinforcements west from Virginia, Halleck ordered Brigadier General Ulysses S. Grant and Flag Officer Andrew Hull Foote to immediately move on Fort Henry and Fort Donelson on the Tennessee and Cumberland rivers in a telegram dated 30 janvier. Scott was dispatched to the Midwest to mobilize reinforcements for Halleck on the night of 29 janvier. On 6 février, Fort Henry fell to Foote’s gunboats and on 13 février, Fort Donelson fell to Grant’s and Foote’s combined forces. These comprised the first two “real victories” of the Civil War for the Union as Gen. William Sherman wrote later. Thus Carroll’s submission was critical to providing needed reinforcements for Grant and to gaining Stanton the appointment as secretary of war. At the time Carroll’s role in the effort was kept secret, but years later Assistant Secretary of War Scott and Senator Wade testified to it before Congress. 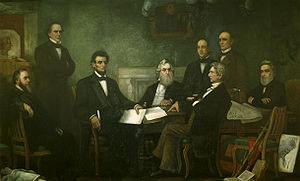 During the remainder of the war, Carroll worked with Lincoln on issues pertaining to colonization and emancipation. She lobbied him to establish a colony of freedmen in British Belize. Although Carroll had freed her own slaves, she lobbied Lincoln against issuing the Emancipation Proclamation fearing that support of Southern Unionists would be lost and resistance to the Union would be stiffened. But, she wrote that Lincoln did have the constitutional right to free the states as a temporary war measure under his power as commander-in-chief, since the proclamation would help cripple the organized forces of the rebellion. Yet the measure was not a transfer of title and would have to be suspended once the war emergency ended. To free the slaves a constitutional amendment was required

In the postwar years, Carroll was active in the Republican Party in Maryland and continued her political writing career. After 1870, however, her life was largely consumed trying to gain payment for $5,000 the government still owed her for her wartime publications. She went through twenty years of congressional hearings. Every military committee but one voted in her favor, but no bills passed the Congress. In this she received support from women’s and suffrage organizations and a biography by Sarah Ellen Blackwell was commissioned by the suffragists in 1891.

Anna Ella Carroll died on 19 février 1894. She is buried at Old Trinity Church, near Church Creek, Maryland, beside her father, mother, and other members of her family. The epitaph on her grave reads, "A woman rarely gifted; an able and accomplished writer."

Well into the twentieth century, Carroll was hailed as a feminist heroine whose contributions were denied because of her sex. Some scholarship however has attempted to discredit her tale seeing her instead as a relentless self-promoter. She had condemned the Emancipation Proclamation and recommended colonization of blacks. Yet research published in 2004, unveiled new sources, primarily Maryland political histories and Lincoln administration records that analyze the Maryland Know Nothing party in a new progressive light and generally supports (but slightly diminishes) Carroll's role in the Tennessee River campaign.